When I met up with Walter Heck in 2009 at hackdeoverheid.nl, we had a little brainstorm about a freer way to do rideshares. He also told me about Kenny and Triphopping. It took until Summer this year to actually meet Kenny, when he stayed quite few days at my place, I hooked him up with git and I started fixing some security issues on Triphopping.

My history with "free and spontaneous travel"... After some failed attempts I gave hitchhiking another chance back in 2003, quite successfully. In 2004 I found out about hospitality club, the year after about couchsurfing. In 2006 I started volunteering for couchsurfing, even spent quite a bit of time at collectives. In 2005 I bumped into a small unmaintained wiki with 20 articles about hitchhiking which we turned into Hitchwiki, now the ultimate world-wide guide to hitchhiking.

Hitchhiking is not for everyone - yet. So even though I've only successfully used a ride share website once in my life, I think there's a lot of potential. The main problem is that it's all over the place. If you're trying to find a ride in Europe you'll have to know which sites to check... Not so easy. Here's where triphopping comes in perfectly - you can use it as a search engine for rides from lots of different sites, craigslist, couchsurfing, several European sites and we'll keep on adding more.

I love spaghetti but not when it's in code. Or well, it's fun actually to try to see some structure and make that easier for others, just like I did with couchsurfing code. So I figured triphopping needed a framework. We researched a couple of options and decided to go with Zend Framework. Not for any particular reason but that it's widely spread, that Drupal would be a hard beast to tame for this, and that we can gradually move towards using Zend.

Now after a couple of weeks coding and geeking in a more consistent way we have a more solid deployment system, a slightly cleaner code base and tons of new functionality. I personally focused on the first things of this. Kenny worked on lots of goodness in terms of new features... 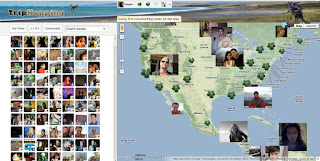 The next day and a half we'll be perfecting the last bits... let me end this with Walter's words about the version that'll be up tonight:

I must say that everything looks and feels a lot more solid and smooth and it seems this might finally give TH the kick in the ass it needed so much :)

Posted by Kasper Souren at 5:08 PM